I'm a person who loves both words and images. A writer by profession, I'm a passionate photographer in my free time. I do not see the arts as a competitive activity, since no two people would ever create the same work even if they had the same subject. I welcome comments and suggestions from all.

Flickr has caught on not only with individuals, but also with certain organizations. They have discovered that flickr can bring attention to their causes, their members, their goals, and their achievements. Recently, flickr and TechSoup, which helps nonprofits share and learn about technology, began a new program called Flickr for Good.

Flickr for Good will provide 10,000 almost-free pro memberships to registered nonprofit organizations and certain libraries in the United States and Canada. I say “almost-free” because while the memberships themselves are free, there is a small administrative fee of $3 per account.

Many groups have already taken advantage of this offer. For example, The Nature Conservancy has a flickr site that ran a digital photography contest that received more than 11,000 entries. Interplast, a group that provides free reconstructive surgery to children in underdeveloped areas, shows before and after photos of patients, as well as images of their own workers. Oxfam sponsored a Starbucks photo petition showing images of people holding signs that said “I support Ethiopian Coffee Farmers.”

Organizations can use flickr to publicize themselves and their work, and also to share information internally. Some groups have posted online photo tutorials, while others have shared photos of potential venues, building materials, or meetings.

To see if your organization qualifies for one of these accounts, check out TechSoup’s NonProfit Eligibility Requirements and Donor Partner Restrictions.

Those of you who write blogs using WordPress now have a new tool to help you find quality photos to illustrate your words: the Photo Dropper. The Photo Dropper allows you to find Creative Commons-licensed photos on flickr and add them to your blog. You find images by doing keyword searches, and after you have selected the shots, the Photo Dropper even adds proper attribution links. It’s easy, it’s free, and you never have to leave the WordPress dashboard while you are working.

END_OF_DOCUMENT_TOKEN_TO_BE_REPLACED

On the off chance that I’m not the last photographer in the world to hear about stringpods, allow me to introduce them. A stringpod is a pocket-sized alternative to a tripod or monopod. It is a way to stabilize a handheld camera using a piece of string, a 1/4-inch bolt with a #20 thread, and a few washers. Essentially it works like this: the photographer secures one end of a string to the bottom of the camera. The other end of the string drops to the floor and the photographer steps on it. By pulling up on the camera gently, the string gets taut and helps to stabilize the camera.

I suspect that the MacGyver-quality of this little tool is what gives it such broad appeal (MacGyver is a television action hero known for inventing quirky tools from common items). Last week I found at least five images of stringpods, as well as numerous instructions how to make them. At least one flickr photographer showed a simple stringpod, while another showed a similar tool made using a thin chain instead of string. I even saw a video showing not only a stringpod, but also a bottlepod and bag-o-rice pod. Believe me, it’s worth taking a look.

I have not yet tried making my own stringpod, but I would be interested in hearing from folks who have. 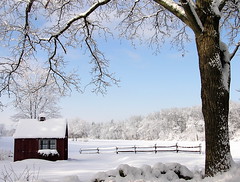 I spend most of the winter shivering in New England despite numerous layers of silk, fleece, and wool. One of the few consolations that the season offers is the opportunity—often numerous opportunities—to photograph snow. Although driving in snow is wretched, seeing it is glorious.

However, for years, my snow shots were disappointing. I would try to capture a brilliant snowy scene and wind up with an image that appeared dingy or slightly blue. Luckily, the cure was simple.

I had forgotten that cameras are designed to expose for a nice, even medium grey. Grey, not white. So snow throws off the camera’s metering system, which tries to make the snow a nice shade of grey.

END_OF_DOCUMENT_TOKEN_TO_BE_REPLACED

Despite all that has been written about keeping the background of your photos simple, that goal is not always achievable. Sometimes your subject is in a place with a busy background everywhere. Or perhaps the subject is doing something that you don’t want to interrupt by walking around the person or requesting that she or he move to a different location.

I have found a very quick solution for such cases. Take the picture you want and then work on the background in Photoshop or another image editing program. First, I crop such images to remove part of the background. That alone makes the background somewhat less intrusive. But often I don’t want to eliminate it entirely; I merely want to de-emphasize it. One quick fix is first to blur the background slightly and then to adjust the saturation of both background and subject. Recently, my brother came to visit. He and another friend of mine had an animated conversation in my kitchen. These were two very large guys and their expansive gestures and expressions really captured my interest. I grabbed a camera and took a whole series of pictures of them holding their conversation in my cluttered kitchen. The first picture shows enough of the background to distract from the person, my brother.