When choosing the right camcorder for your needs, you need to have a general understanding of all the important camcorder features. Knowing about these features as well as how to control them will make your video making process easier and quicker. You can also be confident that you’ll be able to handle any situation you’ll face that might prevent you from taking that ‘perfect shot’.

Today manufacturers have cramped so much technology and features in their camcorders, simply because they can, not because it had to be done. Companies like Panasonic, Canon, and Nikon are also including a lot of features into their cameras and camcorders to stay competitive.  The standalone camcorder market has become incredibly saturated and competitive now, thanks to the mass adoption of smartphones. So, it’s totally comprehensible why these companies are doing it.

When shopping for a camcorder, you’re confronted with a myriad of features. Some of them are relatively straightforward and easy to navigate, others not so much. 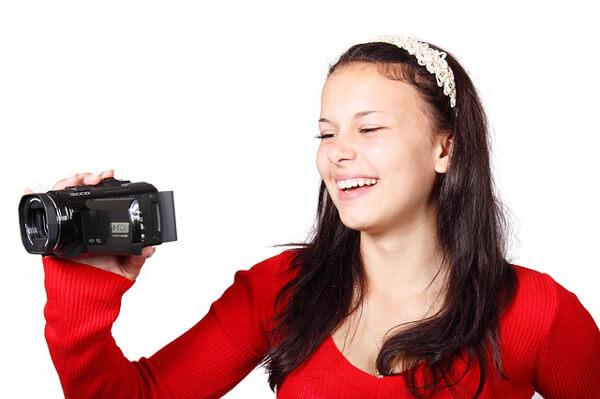 To help you overcome these first world problems (sarcasm!), here’s a guide to the key features found in most digital camcorders.

Most people seem to easily understand this one. The higher the megapixels are, the better the video quality.  Well, that is just half of the story. Camcorders record video in either standard (480p), high definition (1080p) or ultra HD (higher than 1080p).  Typically, HD and better camcorders are on the more expensive side, but they’ll produce higher quality videos. If you don’t own a high definition television or any devices that can play lets say 4k content, you won’t actually enjoy watching the videos you shot with your fancy camcorder.

The image sensor inside your camcorder transforms the light coming through the lens into digital signals which are recorded by the camcorder.  There are two primary types of camcorder image sensors: CCD (Charge Coupled Device) and CMOS (Complementary Metal Oxide Semiconductor).

Both of these image sensor technologies contain thousands to millions of pixels. For many years, manufacturers have been putting CCD sensors in their cameras and camcorders as they were considered superior technology when it comes to image and video quality. However, today most camcorders come with CMOS sensors because they needs less power to operate. This means camcorders with CMOS sensors will have better battery life than ones with CCD sensors.

But for the average consumer, we they should pay more attention to the pixel count and physical size of the sensor itself, instead of arguing what kind of image sensors they should go for.

Therefore you’ll fare well if you buy a camcorder with a large image sensor, even if it has fewer pixels. Stay away from camcorders with more pixels, yet a smaller sensor. Larger sensors are better as they capture more light coming through the lens which leads to better videos.

It’s important that your next camcorder has a zoom lens. Long zoom lenses allow you to magnify far distance subjects. But not all zoom lenses are made equally. Optical zoom is when the lens actually moves inside and outside the camera. In other words, optical zoom is the ‘real’ zoom out there. Meanwhile, digital zoom is something else entirely.

You probably know that digital photos consist of hundreds and thousands of tiny dots known as pixels.  A camcorder with a digital zoom simply takes those small pixels and magnifies them. This creates an illusion that the picture is closer. Digital zoom also makes the image distorted or blurry.

So, don’t pay much heed to digital zoom. Look for “optical” zoom lens rating in the camcorder you’re willing to buy.  The higher the zoom number which is calculated as a factor of “x” as in 10x, 12x, 20x, etc., the better the magnification will be. 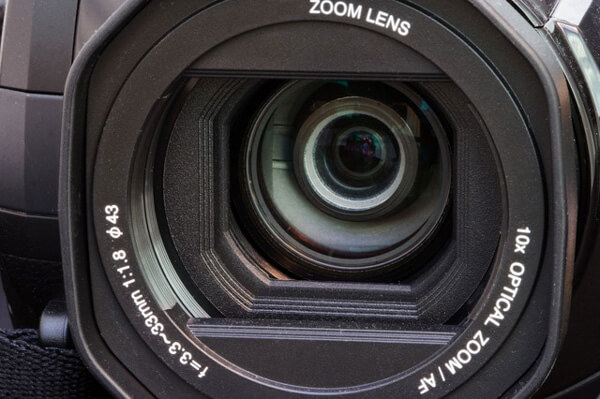 This is another camcorder feature you need to look for.  Regardless if your camcorder comes with a long zoom lens or not, it should offer some form of image stabilization. Image stabilization ensures that your videos, as well as your pictures, come out good. This refers to the storage format of your digital videos.  Common media formats include flash memory (either internal or in a flash memory card) and hard disk drives. Accessing videos stored in flash memory format is faster than the ones stored in HDD format. The type of media your camcorder records play a huge role in the overall design and functionality of your camcorder.

The majority of camcorder manufacturers are using flash memory cards in their camcorders. These are the same memory cards you see on digital cameras. Sony uses its own proprietary cards known as Memory Stick. Other manufacturers use SD/SDHC cards. Flash memory cards have several advantages when compared to other storage formats. They’re small, compact and lighter than their competitors. In addition, flash memory cards do not have any moving parts, preserves battery life and you don’t have to be worried about your video footage being disrupted due to unnecessary shocks or jostling.

A camcorder’s video format is the type of digital file your camcorder produces. The file format of the video your camcorder records really affects the video quality as well as the ease to work on the videos for editing purposes later on. Popular video formats include MPEG-2, H.264, and AVCHD.

This feature is increasingly popular and is found on almost all standalone cameras, camcorders, and smartphone cameras. The face detection feature is the ability of the camcorder to find and focus on human faces in front of it. The technology has been improved to offer sophisticated features such as facial recognition and the ability to shoot still photographs whenever a person smiles.

Bit rate refers to the amount of digital data a camcorder can record per second. The higher the bit rate, the more data the camcorder is recording. Higher bit rates also translate to higher quality videos.

So, do bit rates really matter? Not really unless you are a professional. You don’t need to be too much worried about bit rates while using a camcorder. Just record in the mode that suits you and you’re good to go. However, when buying a camcorder, having some know-how about bit rates can be useful, especially when you’re searching for higher-definition camcorders.

Truth be told, a video is just a sequence of still photos taken one after another. The rate or speed a camcorder captures still frames during recording is referred to as frame rate.  If you want to record sporting events or record in slow motion, then you should purchase a camcorder with faster frame rates. Most camcorders record at 30 frames per second (fps).  Videos recorded at 30 fps have seamless movements. Motion pictures are recorded at 24fps and some camcorders offer this feature. Recording video at frame rate slower than 24 fps will make the video appear shaky and incoherent (which can be what you are looking for if youre a creative).

Many camcorders can shoot at faster frame rates like 60 fps. This is a huge step up than recording at 30fps. Recording at 60 fps is particularly useful in capturing anything with fast movements such as sports or racing cars.

Now, if you want t take your recording up a notch to more faster frame rates at 120 fps or higher, you can capture video in slow motion. You may be confused at this point and probably asking yourself – why recording video at faster frame rate give me slow motion videos? It’s because by recording at very high frame rates, you’re capturing even more details of movement every passing second.

To give you a perspective of what this actually means is that at 120 fps, you’ve four times more information about the video you’ve recorded than the same video captured at 30 fps. As a result, camcorders can slow the playback of this video allowing you to enjoy the footage in slow motion. After all, everything looks different in slow-mo.  Higher recorded frame rates can be played back in slow motion without the footage appearing jerky.

This is one of the most commonly available and built-in features on a camcorder. Controlling the exposure enables you to adjust how light or dark you want your videos to appear. So, what does exposure control mean in practical terms?

Well, let’s assume that your camera’s light meter has a reading of 1/125 (shutter speed) at f/5.6 (aperture). If you adjust the exposure to +1EV, the aperture will be at f/4. This means that you’re creating a brighter photograph by overexposing your subject. The outcome will be reversed if you dialed the exposure to a negative -1EV.

Most of you folks are wondering what I would gain by using exposure compensation. The explanation to the question is simple. You see when taking photographs there will be situations where the light meter of your camcorder can be misleading. This is especially noticeable in situations when is plenty of light around your subject.

For example, if a car or a building is engulfed in snow, your DSLR camera or camcorder will compensate for this excess light by lowering the aperture and using a faster shutter speed. This will result in the final image of the object to be under-exposed. By using positive exposure compensation, you can rest assured that the main subject is adequately exposed. Alternately, you can reverse the scenario when there is lack of adequate light.

Almost all camcorders being sold today can snap still photographs just like any standalone digital or DSLR camera. It is the performance that matters. Generally, camcorders are equipped with dedicated photo shutter buttons and photo scene filters.

I hope this introduction to important features of the video camera has been helpful.

Fredrick Nicholas is a well-rounded blogger who has a wide variety of interests and specializes in doing in depth research for tech. He currently is a blogger for https://techwhippet.com in a genuine effort to provide the best quality content to his readers.
Your name here