There are millions of things which can spoil your photography. And there is no sense to enumerate all of them, because this list will be almost endless. 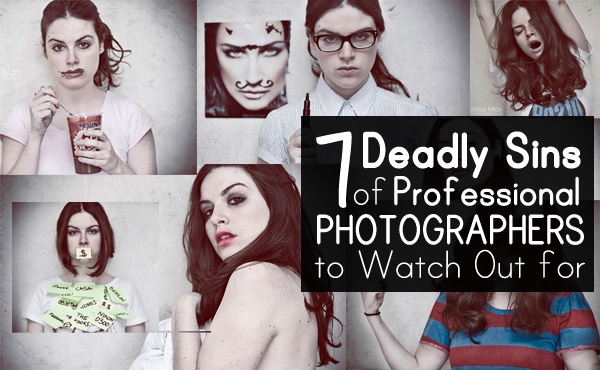 So we decided to concentrate on several factors that can be minimized or even brought to nothing – they are also known as 7 deadly sins.

You can argue that it’s a religious subject, but we’re going to prove you that it’s not exactly true. Photographers can be wrong in some cases (and super professional photographers are not an exception). Thus, we offer you to spend several minutes of your precious time and to take a look at the interpretation of 7 deadly sins of photographers.

By the way, if you think that the article is not about you then probably you’re a sinner! Do you know why? Below there is an explanation.

Too much of anything is not good. When on a hot sunny day you’re given an ice cream it seems to be a godsend and you feel like the happiest person on Earth. But in a minute you’re presented with new and new portions of this delicious food and it becomes boring. Who needs an ice cream when it’s available 24/7? The same goes when you get out a bunch of different photos on heads of common people.

You should know where to stop. Nobody’s interested in your 1001 photos of a cup of coffee in different angles. Choose only the best pictures for your photo portfolio (btw, all the 1001 shots can hardly be the best ones) and hit the target with them.

Even if you own the coolest photo camera ever it doesn’t mean that your photos will be great. Your skills and experience, feeling of beauty and readiness to experiment with objects and techniques matter more than all photography equipment taken one with another.

Do you remember your childhood when you were taught how to write letters and to connect them in words? At the beginning there were curve lines, but you were so proud with them. It was an outstanding achievement! But time’s gone and those old scribbles make you favorably smile, because now your handwriting seems to be perfect (we hope you remember how to handle a pen, do you?).

The same goes with your photography skills. Every taken shot and read article put you to the higher level of the photography mastership. And if you think that you know enough to be a great photographer then you’re failed. Tomorrow or probably even today some young photographer will appear and take the shine out of you. Don’t be lazy to learn something new. Start doing something and probably somebody will appreciate your efforts :). Come on, lazy photographers won’t earn money and win fame.

Who can be honest by saying that he/she has never envied other people? If you are a photographer or some other creative artist you have more causes to desire to have something that belongs to others or to be somebody you’re not really is. There are 100s and 100s of temptations all around.

It’s said that if envy makes you improve yourself to achieve desirable goals then this sin will be written off. But if it destroys you (you feel sad, because some impudent/unknown/awkward photographer was rewarded with your prize) then you’re a candidate to join a list of the biggest sinners. Don’t you afraid of such a perspective?

When you’re a beginner photographer you can and even have to copy others to better understand their techniques and to learn something new. When it’s a single instance in your practice it’s quite ok, but if you’re going to imitate photographers in hope to gain a success, then one day you can be blamed for stealing.

Money, money, money… Everybody wants to have much sitting at home and doing nothing. Photography business gives you wide opportunities in earning money online and offline. But there is a serious danger which can play hell with you. When earning money starts being a sense of your life you can easily forget about the art of photography.

A photo becomes popular when a photographer puts all his soul into it. Thus it brings pleasure, fame and some money to him. But when all your thoughts are caught on dollars and euros your creativity goes down and final photos can be rather boring.

So when you’re doing business don’t forget about inspiration and self-improvement. It’s your best guaranty of success.

Have you ever been in love with some idea? It grabs all your thoughts and feelings and you can’t stop thinking about it all days and nights. This charming intoxication brings wings to you and you can pull up many trees. There can be the only trouble in this case: you’re craze about somebody else’s idea/camera/photo technique/award…

We afford ourselves to compare this feeling with lust because it totally occupies your mind and you’re getting blind for all other things.

In the photography world lust and envy go together. For example, you see a camera of some other photographer and understand that your photos will never be good enough without this fantastic camera. Thus you waste your time and efforts getting this super-duper camera instead of trying to improve your skills. Yeah, camera’s update is a must have thing, but that’s not a fixed idea. Take a deep breathe and relax! And stop comparing yourself with others. All the same, you’re the best one!

Do you think you’re the coolest photographer that has ever been born on the planet? Yeah, probably it’s so and it can even be that the world’s dying to see your fantastic shots. But hey, only one photographer in a million gets such a glory. Babies are also proud of their first steps, but it doesn’t mean that they have nothing to aspire to. We’re sorry if this paragraph hurts you. We just want to say that your photography can be even better than you think – just don’t pitch up and continue to practice.

The problem is that when your pride gets too huge it estranges you from your real and potential fans and customers. Nobody wants to be neglected. So come back to earth, take away your angel wings and be friendly to people :).

Wrath is a favorite photographers’ “toy” when it comes about criticism. Creative people are very vulnerable and the perspective to be unacknowledged scares them greatly. Thus every bad remark excites anger and hasty reaction. It’s enough to be rude to people once or twice and they’ll start trying to avoid you.

It’s quite understandable that you’ve worked hard to present your brilliant photos to the world, but it can happen that nobody is ready to appreciate the. Then you feel lonely and want to bite or to kick somebody to protect your author point of view. Relax! Don’t take it personally! You’re not a $100 note to be liked by everybody :).

Oops! Your sins are running out! We hope you enjoyed the article. Please don’t take it personally (once again) because this post was a kind of joke. Thus we expect you to keep smiling at the moment, do you?

Ann Davlin is a young inspired editor of Design Web Kit Blog. She takes a rose-colored view of all the things around and will be glad to share her world-view with you. Find her on Google+.
Your name here