I’ve just returned from a little jaunt to Portugal and I have to say there is little else that gets me as eager to get my camera out as wandering around a city I’ve never seen before. And of course, in the age of the compact digital camera pretty much everyone takes a camera with them when they travel these days. But how do you come back with photographs your friends and family won’t have to feign interest in? Here’s a few basic tips:

1) Be selective. It’s tempting when you’re surrounded by new things, impressive architecture, beautiful landscapes, and photogenic locals to go nuts and photograph everything ten times over. Especially when you’re using a digital camera and can tell yourself you’ll delete half of the photos later. While there’s nothing wrong with taking lots of photos make sure you scale it down a bit (i.e. do the deleting part) before you showcase your holiday snaps. Even Great Aunt Maude is going to struggle to feign interest in 200 photos of a church, however architecturally brilliant it is.

2) Try a little originality. If you’re photographing an iconic site see if you can come up with a more original way to photograph it. A different angle, in different light, or different weather. Whatever you can think of to make it look less like you just photographed a postcard. Adding people to the shot, whether tourists or locals, can also make it more interesting. That way the iconic feature is the background to something less commonly photographed.

3) Wander away from the major tourist attractions. Two of my favourite shots from Portugal are these: 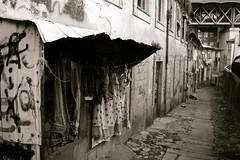 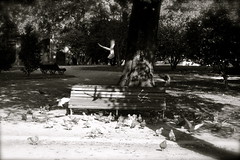 both of which were taken in “off the tourist map” areas of Porto. Not only will you get more interesting photographs but you’ll get to see more of the real culture of the area too.

4) Plan before you leave. If you want photography to be a central part of your travels think about the equipment you’re taking before you leave. For the Portugal trip photography wasn’t my main aim but I knew I would want to come back with a few good shots so I opted for my digital SLR over my compact camera. But since we would be moving around a lot and the airline I was flying with had tight luggage restrictions I chose to leave the tripod and extra lenses at home. Think about your destination and the type of photos you might want to get. For example if you’re heading to Paris and thinking you’d like to get lots of night shots of the city then don’t abandon the tripod. But if you’re backpacking and mostly going to be taking shots during the day you’ll probably want to save yourself the extra weight.

5) Get some aerial shots. If you’re flying to you destination this is your chance to do some aerial photography. It can be tricky to get good shots from a commercial airplane but it is certainly possible. It’s easiest if you have a seat forward of the wing so that vapours from the aircraft’s engines don’t appear in your shot. Wipe the window off first to get rid of all the grimy fingerprints, and put the camera near the centre of the window to avoid the effect of the curved perspex. On longer flights the flight crew will often make announcements when something of interest is visible from the plane but it’s worth keeping an eye out yourself too. Take off and landing are great chances for photography but be aware that some airlines may ask you to turn off your digital camera during these times. These were both taken on commercial flights: 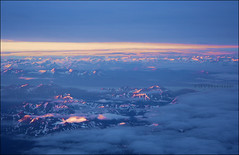 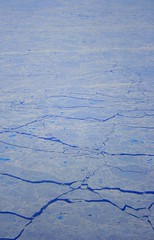 6) Don’t be afraid to photograph local people or fellow tourists. But if you can ask permission first. If you ask politely you’ll find that most people will say yes. It’s worth learning to ask this question in the local language but often holding up your camera and smiling will get your intention across just as easily. If someone does say no respect their answer and don’t photograph them. In some places, especially poorer communities, you may be asked to give money in exchange for taking a photograph. And people will often ask you to send them a copy of the photograph. If you agree to do this, make sure you actually do! Don’t automatically try to exclude other travellers from your photographs, often the interaction between tourists and locals can make a great shot.

7) Photograph your travel companions! As much as your family and friends back home will enjoy your photographs of the local landscape, culture, and wildlife they will probably be most interested in photos of you and your travel companions enjoying your trip. This is especially true if you’re traveling with children and showing the resulting photos to the grandparents or other extended family. To get some nice photos to show off put as much effort into the family shots as you put into the rest of your photographs. If you’re taking a posed photograph look for the best background, arrange the people into a good pose, and consider using a relatively low DOF so the subjects stand out from their background. Remember though that you are on holiday and your kids probably won’t appreciate too much of this kind of activity! Get unposed shots of your travel companions as well, think about the composition for these too but they may need to be a little more hurried so you don’t miss he moment.

8) Don’t forget insurance. Before you set off make sure your travel insurance will cover your camera equipment should it get lost, damaged, or stolen. Many travel insurance policies only cover single items worth up to £100 or £200 so if you’re traveling with your digital SLR and extra lenses you may need a separate policy for them to be covered. If you’re a UK resident E & L offer specific photographic equipment insurance that’s cheap and provides good worldwide cover.

If you have any tips of your own, let us know in the comments section.