One of the most frustrating things that can happen while editing photos is lag. Especially photoshop brush lag. Imagine, you’re right in the middle of doing some intricate touch-up edits to finalise an amazing photo for your portfolio or for a client and you cannot get the photoshop brush to do the edits in the exact place that you want it to because it keeps lagging. I know there is only so long before I would want to throw my computer out the window through sheer frustration! Luckily for you there are 5 easy steps that you can follow to help you optimise your photoshop working environment and get rid of that annoying photoshop brush lag.

Whether you are brand new to photoshop or have been using it for years, sometimes as the software updates over time it can start to do weird, annoying things like the brush lagging.

Now normally you would be all over the internet on the many blogs and forums finding a multitude of different ways to fix the brush lag. You do not have to do that though because I thought I would save you the effort and compile them all into this article.

The introduction of the brush smoothing algorithm to Photoshop CC 2018 and later allowed users to get a more polished look, with cleaner lines when using the brush tool. However, since then many users found that their photoshop brush appeared to slow down and lag.

Brush spacing refers to the space between each “dab” of the brush tool. It is automatically set at 25% which is generally ok for most cases.

Note, if you are using a 3rd party brush lagging may be caused by the default spacing setting being lower than Photoshop’s 25% or the brush may just be created using complex code.

Here’s what Unrighteous suggests To Do About Slow Photoshop Brush

If you find that your brush is still lagging, then the next step is to reduce the file size. It’s so easy when working in photoshop to suddenly have an image with several different layers, all of which take up memory space and can cause the brush tool (or any photoshop tool) to lag.

There are a few different ways that you can reduce the overall size of the file you are working on.

The next thing to check is that photoshop itself isn’t the problem. You may be experiencing a slow brush tool simply because photoshop hasn’t been optimised on your device for its best performance.

Optimise How Much Memory Is Allocated to Photoshop 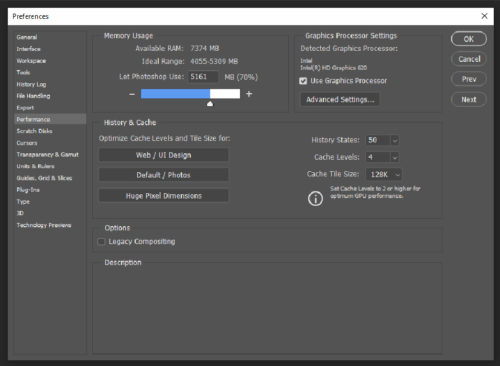 One of the reasons why your brush tool may appear to have slowed down and be lagging is because the rate at which the screen redraws as you edit is also slow. Changing your GPU settings may help speed your brush tool up.

In the performance section of the preference settings you can fine tune your GPU by clicking on the advanced button and choosing between basic, normal, or advanced. Basic uses the least amount of GPU memory and is a great option if you are running other programs that use GPU or if you find that there are bad screen redraws.

Normal is the default setting and advanced uses the same amount of GPU as normal mode but enables more advanced featured which improves performance. The advanced setting is best when you are working in 3D.

You do have the option to change the scratch disk used which can be helpful especially if you are running low on storage space on your hard drive. Choose Edit > Preferences > scratch disks to change which hard drive you want to use.

If you are still having problems with you brush tool lagging the next thing to check is your device itself. As you can access photoshop on a range of different devices not all of these suggestions may be relevant.

The first thing to check is that your devices drivers are up to date. This appears to be a common fix in those that use photoshop on a tablet. You can easily update the driver in the device manager. Alternatively, you can reinstall the device driver too.

Just like in the photoshop software itself, the reason why your brush tool is slow may be because your device has little free CPU left. This can happen when you have multiple different programs running at once or too many browser tabs open.

The easiest way to free up space is to close down any programs or browsers that you don’t need open. This may include ones running in the background, so it is worth opening up task manager to see which programs are using up all the space.

Another little trick I picked up to help improve performance is to turn off Bluetooth, disconnect from any wireless printers and even (if needed) turn off the Wi-Fi. If you’re anything like me, you are constantly battling between having a device with a charge that lasts more than a few hours or a device that works at its peak performance. Most devices give you the ability to alter this on a sliding scale from “save my battery life” to “perform like an Olympic Champion”.

If you’re having problems with your brush tool lagging it is probably worth checking that your device isn’t stuck in “save my battery” mode and instead push it more towards “performance mode”. Sure, you might need to put your device on charge sooner but you’re also likely to finish your project sooner because there’s less lag.

Want to learn more about using photoshop in your photography? Check out the 5 Must-Know Photoshop Tricks For Photographers