In traditional landscape photography (or cityscape or seascape), photographers combine wide angle lenses with small apertures to achieve sharpness throughout an entire scene from the foreground to the background. This is in direct contrast to, say, portrait photography where the background is intentionally blurred. When looking at a photograph, the eye naturally goes to foreground elements and wants to rest on whatever is in focus. That works out perfectly for portraits where you usually want the focus on the eyes of your subject. The blurred background and in-focus foreground are strong compositional elements that focus attention where you want it. But in a photograph with everything in focus, you can’t rely on a single focus point to hold the viewer’s attention.

When viewing a photograph, people are usually attracted to areas of high contrast, in-focus foreground objects, and strong lines, curves, and shapes. People often also scan a photograph from top left to bottom right (similar to reading) and points at the intersections of the rule of thirds grid are strong attractors as well. When everything in a photograph is in focus, the eye often wanders and you need to make sure that every layer of the photograph—foreground, middleground, and background—contain some interest. Between Heaven and Earth. 1/320s @ f/9, 18mm
This seascape has objects of interest at all levels. The foreground rocks,
middleground person and shoreline, and the background sky.

When shooting a photograph with a lot of depth, people often only think about the background. Think of landscape photographs you’ve seen of far away mountains or a sunset but with nothing of interest in the foreground or middleground. It’s usually pretty easy to include some foreground and middleground interest if you just think about it. An easy way to do this is to lower your viewpoint a little. Find an interesting group of rocks or flowers or some other object on the ground near you and recompose to include that in your photograph. Interest can be added by objects or by strong shapes and textures. A few steps to the left or right can also change the composition dramatically. Don’t be content with what you see in front of you. Move around a little to find a better view with interest throughout the scene. 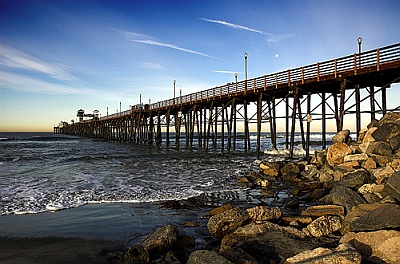 Oceanside pier. 1/250s @ f/8
The eye naturally follows the strong diagonal of the pier from
the foreground rocks to the background horizon and sky.

Once you’ve got a scene with foreground and middleground elements, a strong compositional element to think of is a line or curve that takes the viewer on a tour of everything in the scene. It could be something like a road or a fence, a wall or railing that immediately grabs the viewer’s attention. Or it could be something more abstract like a strong shadow, a color, or the direction people in the scene are looking or appear to be moving. And pay special attention to depth of field. A blurred foreground object can ruin an otherwise beautiful photograph with a strong, in-focus background.