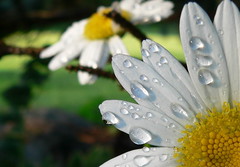 Do you take the same types of pictures over and over again? You know what I mean—hundreds of flower images (or cars or cats or whatever) fill your photo albums, but no portraits, buildings, action shots, or street scenes. One school of thought urges you to push yourself to shoot what does not come naturally. However, I have another suggestions: stick with what you love, but work to perfect that subject.

There is a vast difference between lacking the imagination to try new subjects and deliberately working on one subject to develop skills. The first is a type of laziness; the second is a path to mastery. I like to think that I’m following the second path, but I’m too close to tell, so I’m going to use another example, flickr photographer Steve Wall.

Now, I’ve never met Steve; I know nothing about his life; he isn’t even an online correspondent, or at least he wasn’t until I asked permission to use his photos. But I have been following his photography on flickr for a few years because I saw some pictures of his that I liked and marked him as a contact. As such, I see a thumbnail of his latest image whenever I sign on.

What I’ve seen has held my interest. I’ve been intrigued by how he has developed his skills in one particular genre: water drops. Now perhaps he works as hard on other subjects, but this is the one that caught my attention.

One of the first images of his that I noticed was a simple daisy decorated with water drops. It was a pretty image, and it certainly showed technical know-how. Over time, though, I noticed that Steve often displayed what he called his “obsession,” the water drops themselves. 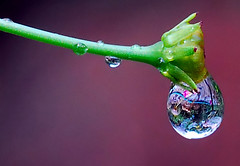 His images began to show well-formed droplets, frozen in time. The flowers became more incidental. Embedded in his water drops are inverted refractions of what lies behind the drops. (I didn’t know this until I read it on Steve’s water drops photoset). His images were fascinating, and over time the tiny refractions began to take on more importance.

I have no idea what skills Steve had to master in order to take these pictures. What I do know is that they show practice—lots and lots of practice. You don’t accidentally take dozens of razor-sharp pictures showing flowers and other items inside water drops. One or two such images could be lucky accidents but not dozens.

What Steve jokingly refers to as an obsession is actually an abiding interest in a subject. He does not merely take the same picture over and over again. He focuses on one subject and uses it as a springboard to develop his skills and his eye. 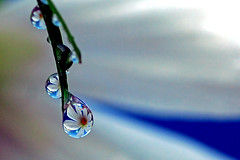 Yes, Steve is still taking flowers and water drops, but he has clearly learned a lot along the way. He wrote that he wants to write a tutorial explaining how he takes these pictures. When he does, I’ll post the link here. In the meantime, take a close look at his water drop pictures. Let them serve as an example to not only do what you love, but also to try to learn from the experience. That is the real difference between laziness and mastery.