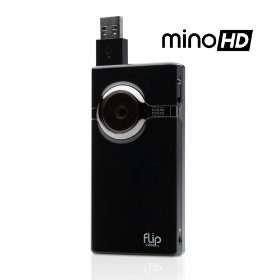 I really like the Flip video cameras. I reviewed the original Flip Mino back in June and recommended it for anyone who wanted to shoot more than a couple of minutes of video at a time or who wanted to reserve the space on their camera’s memory card just for pictures. The Flip Mino is a handy, compact, easy to use video recorder. And the Flip Mino HD (Amazon) is virtually identical in every way except one—it records 720p HD video.

The video and sound quality are quite good. Video is recorded in H.264 format at 30 frames per second. Audio is recorded in AAC format at 44.1 kHz. The average bitrate is about 9 Mbps which lets the Flip store about 60 minutes of video on its internal 4 GB memory. Previous Flip models recorded MPEG4 AVI files. The Flip HD records H.264 MP4 files.

Like the previous models, although the video quality and sound are good, it’s hampered by a cheap fixed-focus lens. Images aren’t incredibly sharp or vivid, but honestly, I think it does what anyone should expect from such a low-cost device. Video from this camera is easy to watch full-screen on a 21″ LCD monitor or TV. But really, like previous models, the videos from this camera are designed to be uploaded to YouTube or other video sharing sites.

One problem I noticed with the Flip was a weird visual artifact caused by shaking of the camera itself. You can see it clearly in the second video below in tall vertical lines like the street lamps and trees. When the camera shakes quickly they go all wobbly. I think this is an artifact of the underlying hardware and how the data is read off the sensor. There’s probably a name for it but I don’t know what it is or exactly what causes it. Any AV experts out there please weigh in in the comments. It should be noted that under normal circumstances this effect isn’t a problem at all. Having just bought a Nikon D90 I wanted to compare the video quality between the two cameras. They both record 1280×720 video. I give the edge in video quality to the D90 because it gives you much more creative control over the video and the lens is always going to be better. Beyond that, the D90 is a big black camera and the Flip is, well, a tiny black camera. The D90 can only record HD video in 5 minute clips. The Flip can record for up to 60 minutes all at once. The D90 uses removable storage media but with the Flip you’re stuck with its 60 minute internal memory. The Flip has a fixed lens and the D90 is a digital SLR with interchangeable lenses. The Flip HD is a little over $200. The D90 kit is over $1,100.

So which is better? As you can see, they are really completely different animals. The Flip is a dedicated video machine that can record high quality video for long periods of time. It’s a nice companion to any still camera, even to the D90 which can shoot video itself. I found that it’s ease of use was perfect for situations where I didn’t really care about getting “creative” and just wanted to record something quickly and easily. And when you’ve got to record something between 5 and 60 minutes, it wins hands down. The Flip HD is a nice camera. If you have an original Flip but you want higher resolution video, this is a worthy upgrade. For those looking for a new digital video recorder, start here.

Below I’ve got two full-resolution sample videos. I shot the first indoors under fluorescent lighting in a typical usage scenario. The second is slightly less typical… I clamped the Flip to the bars of my scooter and went for a totally legal ride (in which no traffic or safety laws were broken for the entire 40 second clip).

Click the link beneath each one to download the original MP4 file (warning: they’re big). Don’t judge the video quality based on the re-encoded flash video below. The originals are much nicer and smoother. Download the full-resolution original videos to get a real measure of their quality (courtesy of blip.tv).