In our current digital age the need for a quick turnaround in every discipline can be cut-throat and demanding. When it comes to the world of digital photography it’s not uncommon to sift through thousands of images after a session to narrow your edit down to a mere selection of 10-20 images. The peace of mind knowing you have an endless shutter count can arguably cause some photographers to “shoot before they think”, sometimes leading to a sacrifice in quality or care in composition. 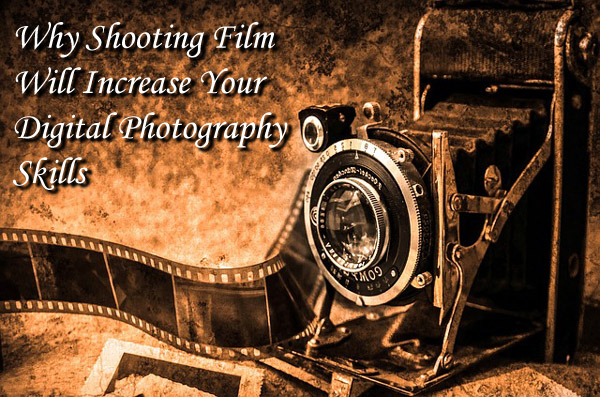 Taking time out of your routine in digital photography to shoot some old school rolls of film might just be what you need to get your creativity flowing.

It’s a great exercise that gets you thinking about your exposure, composition and clarity of the images you produce. Shooting a finite number of exposures can encourage you to refine your craft and think twice before clicking the shutter – which in turn will fine-tune the number of exposures you take on your digital camera.

Why is Film Photography still a popular choice in today’s society?

Most photographers can agree that nostalgia exists in holding a physical image. There’s also discipline involved shooting with film as the awareness of composition, settings and surrounding light will determine how your images will print. With no digital aid – it’s down to you to make the shot count.

Although our era deems film photography an impractical choice for most jobs, photographers such as Ryan Pfluger agree that waiting for your images to be processed isn’t impractical at all. If anything, it adds value and meaning to the photos you produce which makes you stand out from the sea of photos churned out into the world.

Below are just a few ways shooting in film can increase your digital photography skills immensely, by helping you improve the quality of your digital outcomes and better understand the synergy of your camera settings.

It saves both space and time with post-production

By shooting digitally the temptation to push the trigger thousands of times can decrease image quality, resulting in being deleted or archived in the depths of your computer. By shooting in film you take fewer, but well-composed shots that do not require masses of hard drive space.

Post-production will be the biggest time saver as the fewer photos you take, the less you need to edit – increasing your ‘keep’ rate. This skill will translate into your digital photography in a positive way, as the time you take to shoot your photographs will improve a sessions’ overall productivity and result in less images to process.

It takes you back to basics

By starting off with an automatic point and shoot 35mm will free you from the technicalities involved with your DSLR. These cameras have limited functions when it comes to controlling your white balance and exposure compensation, resulting in freedom to capture subjects that are more compelling without having to worry about any technical aspects of your camera. By mastering the basics such as exposure compensation and ISO – you begin to realise how even the most basic of functions can transform average images into amazing ones. When you choose a roll of film to put into your camera, it essentially sets the ISO speed you’ll shoot in which you won’t be able to change until you’ve finished shooting with all the exposures in your roll of film. This leaves you with the shutter speed and aperture to play around with if you have a semi-auto/manual 35mm camera.

This in turn will develop your eye for interesting subjects than can increase the compelling factor by the viewer. See it as a session of reverting back to basics and then moving on to a semi automatic or manual 35mm when you feel freed up and creative.

It allows you to take your time

The patience involved from quite literally making a photo is an incredible skill to learn. Shooting thousands of RAW files only to end up with a small edit can be soul destroying and tedious.

Film photography can help you break out of this habit and encourage you to think before you shoot. Typically, a roll of film will contain around 24-36 exposures, so you already know you’re limited to a finite number of exposures. This fixed restriction encourages you to be an image maker by making you think twice about your framing, light source and significance of your subject matter. It erases the need to snap endlessly at a subject and refines the quality of images you make.

The idea behind shooting in film is to make you think twice and shoot once. Although mistakes can be costly (when you add up development time/buying more film) – this factor alone will make you more considerate before clicking your shutter and forces you learn at a faster rate by analysing any previous mistakes and old shooting habits.

Frequently missing a good shot? Try not to let this get you down – as with life, something better always comes along.

It helps you appreciate the element of surprise

One of the lost aspects in our current generation is the excitement of bringing home your negatives from a pharmacy or specialist photography store, and discovering how your images turned out. One thing that digital photography encourages us to do is constantly monitor the LCD screen, which although is great for ensuring your images are focused and exposed correctly – it ruins all element of surprise. Film allows you to appreciate not knowing how your photos look right away, which in turn develops that anticipation, nostalgia and patience.

It helps improve your awareness

You don’t have the instant feedback of viewing the captured image on an LCD screen when you shoot in film, resulting in a more deliberate approach and an enhanced awareness of lighting and framing that’s very beneficial when you resume shooting digitally.

The lack of LCD means you’ll spend more time looking through your viewfinder than ever before. When shooting tethered with your DSLR, you’ll begin to notice your progress through your images focus, exposure and colour balance awareness. You’ll even notice that you take fewer shots as you’ll have achieved the ones you already need.

It teaches you a sense of discipline

Whenever you want to shoot in film, you have to physically go to a store and buy a roll of finite exposures. In hindsight this puts your total frames into perspective – buying 100 rolls isn’t going to be the most cost effective in capturing THE shot, and it’s this discipline that conversely improves your digital photography in the long run. The awareness you develop in capturing a selection of beautiful imagery means you may only need between 2-3 rolls for a session.

This disciplines leads to more ‘keepers’ when deciding on your final edit. In the back of your mind you probably know you don’t want to nip out and buy yet another roll just to capture more of the same subject because your first session didn’t work out – it’s this restraint that improves the outcome and discipline in your photographic process.

It gives you no ‘fix it later’ attitude

Little tweaks here and there to sharpen or increase the exposure of your image are semi-standard in the post-production process, but what we mean here is that film deteriorates all attitudes to photoshopping those trees out in the background or hiding that awful trashcan.

As photographers we see all backgrounds as backdrops, so any minute detail that detracts attention from your subject should be avoided to reduce editing time in the post-production process, which film really helps you think twice about. You want your backgrounds to frame your subject through shapes, colour and texture – by thinking about your compositions carefully can add value and care to your final images.

The gap between shooting and receiving your developed photos trains your photographic eye to look out for anomalies, with every developed roll getting better and better in terms of its composition and clarity with each and every image you produce.

What to watch out for when buying a film camera

With film cameras being dated technology – you’ll very likely end up with a second hand device. This doesn’t mean you’ll be skimping on quality though, however it’s important to find out as much about the condition of the camera as well as the film outcomes it produces.

For more information on film photography check out Starter’s Guide to Film Photography.

Antonio Leanza owns the London School of Photography in England, UK. He is a photographic artist, coach and teacher with much experience in past lecturing roles at LCC for over ten years and for Ilford Film across the UK. He has a unique approach to teaching and mainly focuses on a students’ creative journey and helping them realise their aspirations in the photographic world.
Your name here